we've begun using instagram (yay!) and are posting some of our favorite and most artsy hunter/jumper photos from the FTI Winter Equestrian Festival. if you'd like to follow us, please subscribe to 'bigeq'. We hope you enjoy the pretty photos and gorgeous horses! You can sample our photos here: 
Here's a lovely photo from the amateur-owner hunters today: 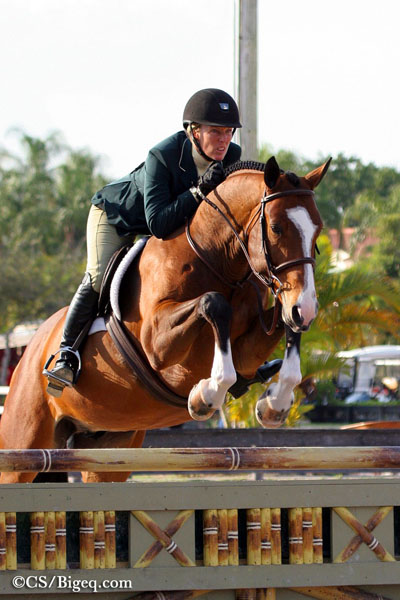 Dashing and Clementina Brown. This beautiful bay is a 2007 Holsteiner Gelding.

For more photos from the amateur divisions at WEF, please visit our Facebook page!


Laura Kraut and Woodstock O are in brilliant form at WEF. What a beautiful jumper.

We have about thirty more photos on our Facebook page, plus an album featuring Big Star and Nick Skelton winning the Sunday grand prix. Please go here to see them! Enjoy!


There are lots of amazing amateurs at WEF, and we hit up the medium amateur-owner jumpers and the a/o hunters this week to see some of the talent:

Show Shots: Up, Up and Away with Uppsala


Since we're on the topic of Laura Linback... we realized she not only won the high a/o jumper class, but also won the $15,000 Brook Ledge Mini Prix later on Friday at Culpeper. What was particularly fun about that win, was the exuberance of her mount Uppsala. "Up" is a good word to describe the 10 year-old Dutch warmblood mare by Andiaamo Z- since she got major "air" both over the fences, and all around the course. ;)

no jump in sight, but Uppsala is getting her hops in

one last buck - just after crossing the timers in the winning time!


Stopped by HITS Culpeper today to watch some jumpers... and saw some great performances on an unseasonably nice (i.e. not unbearably hot) summer day.

One star of the day was Laura Linback, who rode Casino to first place in the high amateur/owner jumper class.

A well deserved pat for Casino, a 2002 Holsteiner gelding by Casco owned by Woodrun, in Mundelein, Illinois. The pair have had a great year so far, winning several classes in Ocala, at Showplace, and now Culpeper.

Second place in the junior/a/o jumper class went to KT Champ, ridden by Hasbrouck Donovan. The 2000 bay gelding is owned by Michael Kirby, of Madison, Connecticut.


Jane Gaston and Lumiere make a striking pair in the Amateur-Owner Hunters. The judges agree, as they were recently awarded the 36 & over championship at WEF. It's hard to take your eyes off the gorgeous chestnut. We've seldom seen a horse where every photo we took was a beauty, but he's quite photogenic! Gaston and Lumiere are from Virginia. Lumiere is an Oldenburg gelding, standing 16.2 1/4 hands. We also want to wish Lumiere a happy birthday. His 9th birthday is March 15!

Another day of excellent competition is in the books. Three big winners emerged:

Chase Boggio won the North American Equitation (we were very pleased with that, as he was one of our favorites based on his #2 ranking on the 2009 Bigeq.com Eq Index). He rode just beautifully and his horse Graphiq went around very smoothly with a lovely rhythm. He completely dominated, winning by more than 6 points. Not even a rideoff this year. Reserve went to Laura King and we hear there's not a nicer young woman on the circuit. Congrats!

Sylvia DeToledo won the THIS National Children's Medal Final. People probably don't realize how difficult it is to qualify for these finals, it's unbelievably competitive and a real grind all year to accumulate the points to attend the finals. So each of those kids walking into the ring has already accomplished something impressive. Nonetheless, Sylvia emerged as the champion on Lion King, who is like the "Grappa" of 3' equitation. He's won the children's medal three times now, with sisters Lindsey and Kristen Mohr (they own him) and now Sylvia. He also won the Ariat Adult Final in '07 with Lindsey. He's a star, and Sylvia rode him to perfection. Props to reserve champion Sydney Calloway, she also rode brilliantly. The final result was very, very close and very well ridden.

Charlene Graham won the North American Adult Equitation title. She epitomized the classic "hunter" in hunter seat equitation, riding two lovely flowing courses on her pretty bay mare "Only You." Charlene was a delighted winner, which was nice to see. Reserve went to Melissa Feller, who was also the 2008 reserve champion in the Ariat Adult Medal Final. She rode her courses in a wonderful forward pace which was nice to watch.

The Capital Challenge Equitation Weekend, presented by us -- Bigeq.com!!! -- has come to a close. Congratulations to all the horses and riders for a great weekend of competition.

For those who were unable to attend or watch online at EquestrianSport.tv. We taped the rounds of the winners. They're on YouTube. Click the links below. Enjoy!